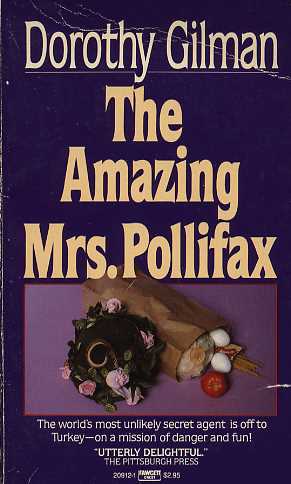 WHAT A NICE SPY
Mrs. Virgil (Emily) Pollifax of New Brunswick, New Jersey, was a widow with grown, married children. She was tired of attending her Garden Club meetings. She wanted to do something good for her country. So, naturally, she became a CIA agent.

THE AMAZING MRS. POLLIFAX
When Emily Pollifax answered the phone that Sunday morning she quickly forgot about her Garden Club tea in the afternoon. The last time she had heard the voice on the other end of the line it had sent her off on a journey that plunged her into a wild tangle of secret agents and high adventure. Now the man from the CIA was asking if she could leave immediately on a mission that would take her halfway across the world. What could Mrs. Pollifax say but yes?
Reviews from Goodreads.com