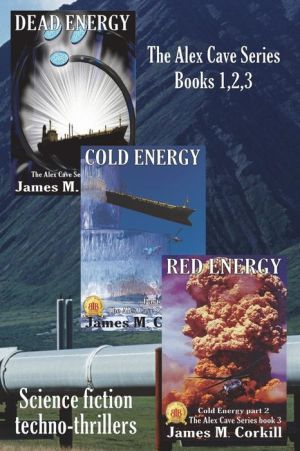 Oil supplies begin to mysteriously vanish without a trace. Society starts to crumble and the only clue is a dollar size crystal found in the hold of an empty oil tanker. An ancient alien artifact causes devastating earthquakes and begins freezing the oceans in a matter of minutes. The Yellowstone Super Volcano is about to erupt! Three exciting science fiction techno-thrillers from six-time award-winning author, James M. Corkill.

It all started when his wife was murdered during a mission, and Alex Cave quit the CIA for a less stressful life as a geophysics instructor at a small college town in Montana. At least, that was his plan.
DEAD ENERGY. While on vacation sailing the waters of Puget Sound, Alex sees a brilliant flash of light from an oil tanker and changes course to help. He discovers there was no explosion, no one on board, and the oil has mysteriously vanished without a trace. The bodies of the missing crew are found in the snow on a mountain a hundred miles away, but there are no footprints leading in or out of the area. Alex’s only clue is the blue crystal, which under a high-powered microscope, appears to be alive.
The shortage of fuel causes mass panic, and Harold Wooley, a sniveling coward with a domineering wife, thinks he can save his family from a world-gone-mad by joining a radical civilian army, but as the group undergoes a drastic change in command, things get out of control when their new leader kills without compunction. Harold must dig deep inside his soul if he is to discover the courage to save his family from their living nightmare.
COLD ENERGY. The odd color of the frozen methane hydride deposit on the ocean floor should have been their first clue. What they find beneath it begins causing devastating earthquakes and freezing the oceans in a matter of minutes.
Sudden freezing temperatures cause weather patterns to change for the worse and threaten a catastrophe that will affect the entire world. Geophysicist Alex Cave leads a small band of volunteers on the high-tech research vessel named the Mystic, in a desperate attempt to remedy the situation before civilization faces ecological disaster, but members of the group have their own agenda, seeking wealth and fame through murder and seduction.
Captain John Dieter’s greed blinds him to the suffering caused by the disastrous weather conditions, and he enlists the help of modern day pirates to capture the Mystic and take it to an unknown island in the Bering Sea, the supposed location of a vast horde of stolen treasure.
Alex begins a desperate race to find the Mystic, the only ship capable of finding a solution.
RED ENERGY. Just when he thinks he might succeed, Alex is betrayed by one of the crew, who steals the advanced technology and takes it to COBRA, a private top-secret research facility south of Yellowstone National Park.
The scientists have no idea what they’re dealing with, and when Alex’s family and everyone on earth are put in grave danger, he begins a desperate race to save them.
How does Alex save humanity from extinction?

Find out by grabbing your copy now!