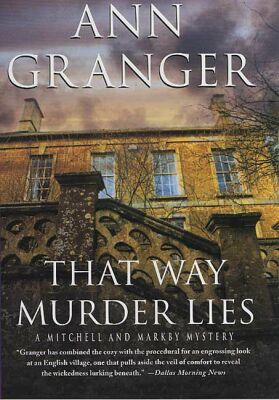 Meredith Mitchell is delighted when an old friend from her consular days, Toby Smythe, turns up on leave between foreign postings. But Toby has a problem---or rather his relative Alison Jenner has---and Toby wants to enlist the help of Meredith's fiance, Detective Superintendent Alan Markby. Alison has been receiving anonymous hate mail in which reference is made to a time twenty-five years earlier when she stood trial for the murder of her aunt, Freda Kemp, but was acquitted. Who is the writer, and how does he or she know about this secret in Alison's past?

Markby is reluctant to become involved, not least because Toby is hardly his favorite person. Besides, he and Meredith are planning their wedding, and distractions aren't welcome. But inquiries into a poisoned pen campaign soon turn into a murder investigation.

With the help of Inspector Jessica Campbell, a new member of Markby's team, and the non-professional but enthusiastic assistance of Meredith and Toby, the inquiry unravels a twenty-five-year-old mystery and its dreadful legacy of violence.
Reviews from Goodreads.com

I think this book is the last in the Mitchell and Markby series as it was released in 2004 and no new books in this series have come out since. That's not to say it's the last of Ann Granger's books or series, as she has many other series in her backlist. I must say I'm sorry to see the end of Meredith and Alan Markby. I have enjoyed them and their sleuthing as well as their rather complicated and prolonged love life. At the end of this book, they are happily looking forward to their marriage and to their new home at the old vicarage. But first they have to solve a crime that appears to start from poison pen letters and an old 25-year-old murder that was never solved. Markby is asked by Meredith to look into the letters that have been sent to Alison Jenner, but before they can get very far forward with that, one of the members of the Jenner household is found dead face down in their ornamental pond. It soon becomes apparent that the old case is still very much in someone's mind, Dirt has be dug up, hatchets have to be buried, and the police need to take a fresh look at an old case before this one can be closed. I'm going to miss the Village of Bamford, and I'm going to miss Meredith and Alan - two of the most likeable sleuths out there.