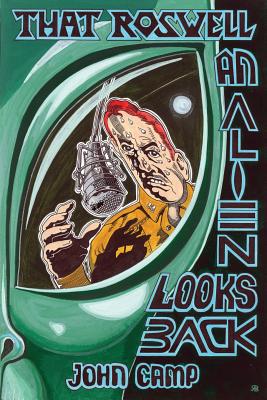 Share:
That Roswell: An Alien Looks Back The Roswell UFO story has two sides: human and alien. The human side drones on and on, but what about the alien? Was it a long Monday that ended on a stretcher in a sweltering tent on a patch of New Mexico desert littered with the remains of your craft and crew? With an Army captain in your face asking stupid questions and recording everything you say, nobody on the planet possessing the tiniest clue about treating your massive injuries? How cooperative would you be? A little sarcasm might creep into your answers. Maybe you'd want to show the captain who's really in charge, and everybody bugging you to stop the impending death of the human race could take a break to change their undies. That Roswell: An Alien Looks Back weaves together historical details from 1947 and old-school comic book zaniness. It's also the first book that presents the Incident in a way that leaves no room to doubt the wisdom of the cover-up.