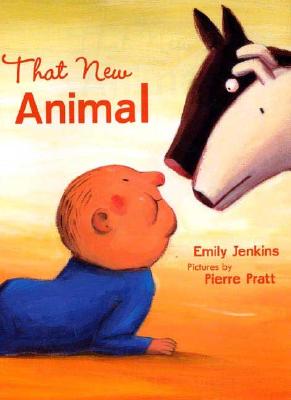 
A new baby changes everything . . . for two dogs
FudgeFudge does not like that new animal. Marshmallow does not like it either. Not even a little bit. So begins this forthright, hilarious, and boldly illustrated story about two dogs that see the arrival of a new baby as a huge problem. They don't like the way that new animal smells or the way the people just sit and stare at it, forgetting all about FudgeFudge and Marshmallow. They have to do something about it, but what? Then one morning a stranger named Grandpa arrives, and he wants to hold that new animal. Instantly FudgeFudge and Marshmallow know they can't allow that. Why? they ask each other. Because, by now, that new animal has become their new animal.
A picture book that speaks with wise and knowing humor to every parent and child who has welcomed or resisted an addition to the family.
That New Animal is a 2005 Boston Globe - Horn Book Award Honor Book for Picture Books.