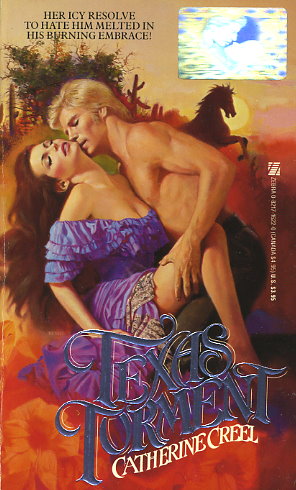 ARROGANT COWBOY
Union officer Daniel Jordan moved South to take possession of his cattle ranch -- and to stake his claim on Adelaide Caton, the golden-haired spitfire who ran the neighboring spread. He had met her once, before the war, and never forgot how he savored her milk-white skin and revelled in her estatic embrace. Because she was his enemy, he had loved her and left her. But because she had set his blood afire, he would win her passion again -- or force her to sell him every last inch of her precious Southern soil!

INDEPENDENT HEIRESS
Adelaide's heart skipped a beat when she saw the rugged rancher. Her cheeks flamed when she remembered how he had tenderly kissed her from top to toe. Her flesh burned with the memory of how he discovered her desires and left her trembling with satisfaction. But most of all, the spirited beauty could never forget how he had run out on her to fight for the hateful Yankees! She swore she'd never give in to his masculine charm and sensuous touch ever again ... but before she could tell him to go, Adelaid was begging him to stay and quench the blaze of her raging Texas Torment.
Reviews from Goodreads.com