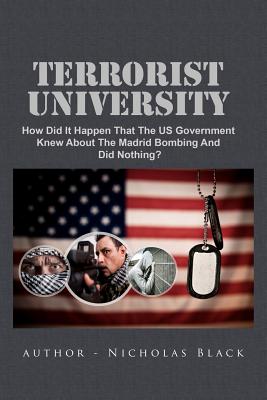 Wanted al Qaeda agents. U.S. counter-terrorism operatives. American officials— dead-set on stopping terrorist activity and preventing the deaths of innocent civilians the world over. Except they didn’t. And instead, I became a pawn for the U.S. government and the Madrid train bombings of March 11, 2004 still occurred. Even after I handed evidence over to high-level American officials that could stop a devastating al Qaeda attack, the powers that be did nothing. And countless people still died. I am Nicholas Black, a former Security Contractor, U.S. Navy serviceman and member of the French Foreign Legion. I am also a former prisoner, having served time in Valdemoro prison in Spain. Also known as “Terrorist University,” it was here, while awaiting extradition that the U.S. government decided to use me to gather information on al Qaeda. I became friends with my fellow prisoners—some of them the most wanted men on the planet—and I earned their trust. All in the hopes of serving my country and possibly having the chance to save some lives. My efforts were for naught. A day that began as any other, but ended bloody—March 11, 2004—still came and went. And the U.S. government simply watched, even when they had the knowledge, and the means, to prevent it. Terrorist University is my story.
Reviews from Goodreads.com