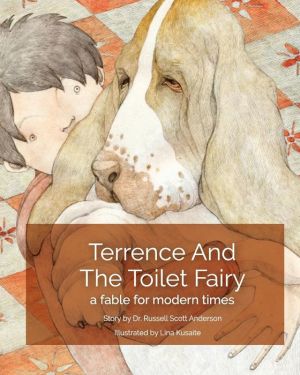 Share:
America is more politically divided than it has been at any time since the civil war, and each side is, by any standard of behavior which we teach our children, behaving badly. The problem is, our children are watching.  This book is written as a fable for modern America to offer some explanation to our children, and possibly a lesson to our parents, media, and politicians on what’s wrong with how we’re all behaving.  We’re sending our children mixed messages about what constitutes appropriate social behavior.  Is bullying permissible?  Is it admirable?  Is it okay to misrepresent the facts if it suits our own political objectives?  Unfortunately, the answer to all of these questions is no.  And that is what our children have been taught their whole lives, but it is not what they are seeing on their televisions or on the streets of our country today.  This results in stress, distrust, and confusion on their parts.  That’s what Terrence and the Toilet Fairy tries to address.
Terrence is an unfortunate third grader whose mother has died and is facing his first summer without her, he is also being tormented by a bellicose neighborhood bully, C.B. who aims to make his life miserable. Terrence asks his father (a plumber) to tell him a story before bed one night and his father relays to him the story of the Toilet Fairies and how they came to be.  Terrence becomes obsessed with capturing a toilet fairy, and does, he captures Veb, a not very brave, not very magical fairy who has a bad tendency to make matters worse, but who is also a pacifist at heart.  Terrence (with the help of Veb) and C. B. swap offensives each getting progressively more dangerous and violent, until in the final conflict Veb refuses to participate and Terrence carries out his ultimate plan for revenge that ends up with both himself and C.B. in a dangerous and individually inescapable trap.  They are forced to cooperate to survive.
Terrence and the Toilet Fairy was originally a screenplay written by Jackson Anderson, Kevin Ivey, and Russell Scott Anderson, it was written several years ago and envisioned Jack Black in the role of the Toilet Fairy,  It made it to Black’s Black & White Productions, but was unable to meet the funding level that they required for participation as the banking crisis intervened and the hedge funds that had committed to the project disappeared.  So it sat.  In the wake of our country’s most recent election cycle Anderson saw it as a story that applied to America now more than ever.  He set about converting the screenplay into a novella, and in the process created a new American folklore.