Swords in the Mist — Fritz Leiber 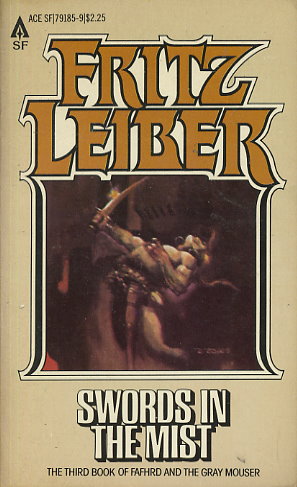 Share:
THE THIRD BOOK OF FAFHRD AND THE GRAY MOUSER

WHEREIN
the two greatest swordsmen in Lankhmar try out a new way of life, but give it up in favor of the lure of the sea and an Adept's Gambit.

The lives of adventurers and soldiers-of-fortune often take strange and hazardous turns, leading them into perilous sea voyages, contests with scheming sorcerers, and encounters with desirable enchantresses.

But no one could have predicted the path that was to take Feud and the Gray Mouser from the back alleys of Lankhmar to weird adventures along the coasts of Nehwon's Inner Sea (and under it); across harsh deserts and cold mountains, to a tomb with a dreadful secret and the most taxing sword fight in the Gray Mouser's duel-starred life, and the end of the quest for the Castle Called Mist, in the trial of their SWORDS IN THE MIST