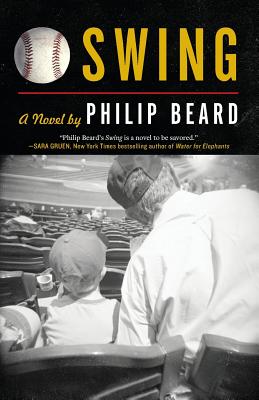 Winner of the 2016 IPPY Gold Medal for Contemporary Fiction

"Philip Beard's Swing is a novel to be savored." -Sara Gruen, New York Times bestselling author of Water for Elephants and Ape House

John Kostka is three feet tall but larger than life, moving through the world on gloved hands and powerful arms as if on a set of parallel bars. Henry Graham is a ten year-old boy whose father has just left home for good. When the two meet at a downtown bus stop, all they seem to have in common is their love of the 1971 Pittsburgh Pirates. But that is enough to begin a life-long friendship that, eventually, enables both men to confront old enemies and heal old wounds.

Philip Beard's third and most accomplished novel swings between two narratives the way John Kostka swings through life. The result is a multifaceted meditation on childhood heroes, the beauty of baseball and the power of love to heal a family in crisis.

"Philip Beard's novel Swing is complex and rich, and the characters feel fully made of flesh and blood as they make their way through the pages... It's at once heartbreaking, uplifting and emotionally resonant. In a word, it's beautiful."-Pittsburgh Magazine

"Beard's characters are flawed but inherently likeable, and he allows us to know them intimately, so their missteps and misfortunes hit like a punch in the gut every time. Every character--the absent father, the troubled sister, the mysterious wonder that is John Kostka--feels alive due to Beard's skillfully simple prose and dialogue. ...Philip Beard's other novels, Lost in the Garden and Dear Zoe (named as one of Booklist's Ten Best First Novels) have garnered some attention, but with Swing, Beard has hit it out of the park." -Foreword Reviews

"If your sensibilities allow for the careful blending of baseball nostalgia and muscular literature, Swing is right there in your wheelhouse. Mr. Beard's richly formed characters each command the reader's interest from the quiet urgency in their evolving selves, but none is as unforgettable as John Kostka, a legless veteran who swings himself on and off PAT buses with varying degrees of success. That the story unfolds against the backdrop of the decidedly non-fiction Pittsburgh Pirates of 1971 is not just a literary device for time and place. It's a launch point for Mr. Beard's own subtle beauty-of-baseball treatise, and the beauty here lies as much in the writing as in the game. The reader needs no special affinity for either the team or even the sport to enjoy Swing. Still, in the game's most elemental terms, Mr. Beard's swing here is just about perfect. In fact, he crushes it." -The Pittsburgh Post-Gazette

"Like Chad Harbaugh in The Art of Fielding, Philip Beard uses baseball as a lens to view love and loss. Swing is a generous, heartfelt novel filled with imperfect characters worth loving, and a valentine to Pittsburgh and the great Pirate teams of Maz and Clemente." -Stewart O'Nan, award-winning author of Faithful and Emily Alone