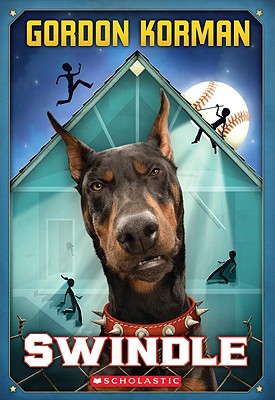 When Griffin Bing plans a spooky sleepover in a haunted house that's about to be demolished, he isn't planning on making a fortune. But then he discovers something more valuable than gold: a rare Babe Ruth baseball card, hidden out of view for many years.

Griffin's on his way to a million dollars . . . until a mean collector named S. Wendell Palomino (a.k.a. Swindle) tricks him out of the card. Now Griffin must put together a team of friends (and one or two enemies) in order to get the card back. There are many things standing in their way -- a menacing guard dog, a high-tech security system, a very secret hiding place, and the fact that none of them can drive. But Griffin is a Man With a Plan, and even if some things go way beyond his control, he's not going to let his fortune go without a fight.

When Griffin Bing sleeps over in a broken down haunted house he finds a rare Babe Ruth baseball card. He goes to a collector named S. Wendell Palomino who tells him it's worth nothing so Griffin gets 20 dollars for it. He then goes on the internet to see how much it's worth and it's 1,000,000 dollars. But he's the man with the plan and he must assemble a team and get it back. Swindle was a very good book and I liked how the secretly sneak into the collectors house. The book is very well written and it was hard to put it down. I highly reccomend this book to anyone.