Diane Boston lives with her Marfan syndrome-afflicted 13-year-old son in a suburb of Chicago and teaches social studies at the high school, with the students even voting her Teacher of the Year. But she has some dark secrets. Her ex-husband Greg always suspected that Diane kept things from him, but he has no idea just how right he is. When Diane's son, David, finds a box of unmarked videotapes and watches one of them out of curiosity, he discovers that it's a hardcore adult movie from the late 1970s. The star, Lucy Luv, was an actress that mysteriously disappeared in 1980. Some suspected she'd been murdered. David recognizes the actress as his mother. Then, somehow, the news of Diane's involvement in the adult film business hits the streets and causes chaos at her school and at home. It also attracts the attention of the West Coast porn czar who has ties with organized crime. Apparently when Lucy Luv disappeared, she took a cache of stolen diamonds with her. This is the catalyst for a non-stop roller-coaster ride of suspense and mystery that involves the dark side of the adult film industry, the mob, kidnapping, and murder.
Reviews from Goodreads.com 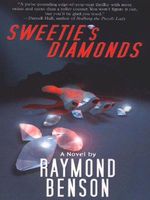