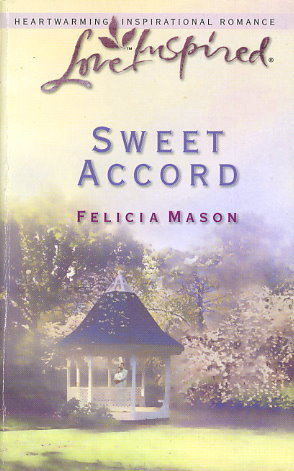 Light, melodic tones. That was a worship service. Not guitar music! At least, Haley Cartwright believed that, and she was willing to do anything to prevent the new choir director from changing things. No matter that the man stirred up more than just Haley's anger and made her yearn for things she had long given up on....

Matt Brandon had come to the small Oregon town to start over. He'd never expected to face an adversary like Haley. And though she protested she wanted him out of town, he saw how much his music touched her. Could he use his music to work through her fears and show her the blessings of love?
Reviews from Goodreads.com

The church I used to be a member of was facing the same struggles as this one. I wish the ending had been as well, but it wasn't. The church split two or three times over the issues of change, etc. It's a nasty subject, and one I'm afraid we'll always have to struggle with. I could relate so well, and when Matt explained the reason things in church change, I wanted to engrave his dialogue and hang it on my wall! never had I heard such a keen explanation on that issue!!!

This was a sweet story. The author (I understand has a more secular market of books than inspirational) seemed to really be in touch with the issues in church and Christianity. I enjoyed listening to Matt witness to the teenage girl. I enjoyed his bringing fresh music into the church. I even enjoyed the fact that he wore an earring and rode a motorcycle.

I did NOT think Haley's reaction was necessary when she learned the truth. She was the one who said that she wanted stuff left in the past. Though it may have been best to be honest in the first place, Matt DID tell the preacher about his past. And he DID give his real name. We don't always want to tell about hurtful things from our past.

I also think she resolved her conflict about him way too fast. I think it should have taken her MONTHS to have regained the trust, and in the meantime, she would have had to confront her issues. I feel Matt's were resolved, but I don't believe Haley's ever were. Because of her past, she will always struggle with change and acceptance, and that wasn't mentioned here. It was like one minute there was all this conflict, then POOF! It was gone...

But there were so many great parts in this book! I already mentioned my favorite part. I looved Matt! Haley had issues, and I didn't care too strongly for her...I'm glad they got married and all, because Haley needed someone strong like Matt, but I feel sorry for Matt having to marry so much baggage...