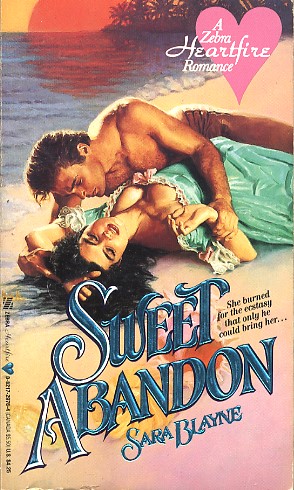 BURNING WITH DESIRE
Sent away from her beloved sun-drenched island of St. Dominique for a proper convent education in Paris, Angelique Gilbert was a girl on the verge of womanhood -- ripe for adventure and for love. So when the legendary Captain Wesley Locke arrived in Paris, Angelique didn't hesitate to disguise herself in rags and steal away from the convent to see the American hero for herself. With one look at the rugged, daring sea captain, Angelique knew that here was a man to die for. Here was a man to teach her about passion, about ecstasy, about what it meant to be a woman...

BRANDED BY PASSION
Locke was completely bemused by the arresting little slip of a girl who had thrown herself at his feet in a Paris tavern. On impulse he took her with him on board the Sea Wolf. Obviously a girl of the streets, she could always pay for her keep by warming his bed during the lonely nights at sea. Not until he had stripped her of her rags did he realize his mistake. But though she had the pampered white body of an innocent young lady, she would not leave his bed without being branded by his skilled loving and enslaved to passion's SWEET ABANDON
Reviews from Goodreads.com