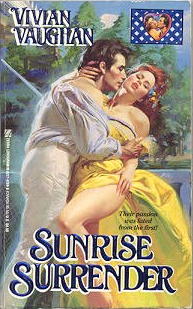 Their passion was fated from the first!

Delta Jarrett hoped that a scenic riverboat journey down the Mississippi would prove just the distraction she needed from the recurring dreams that had been haunting her sleep...disturbing, wickedly passionate dreams in which she was seduced by a dashing pirate whose searing embrace seemed all too tantalizingly real. Then one night aboard ship, she suddenly came face to face with her fantasy lover! Boldly seductive, Brett Reall was no buccaneer, but he was a man of deep, dark secrets...secrets Delta was determined to fathom. For though his manner was harsh and cold, his smoldering gaze burned hotter than a southern sunrise...and when at last his lips claimed hers, she knew that this was the man she'd been fated to love!

Accused of a crime he hadn't committed, Brett had fled his bayou home in disgrace. Forced into the life of a desperate fugitive, he hardened his heart against any hope of love. Then he saw her across the gambling tables - a bewitching, blue-eyed beauty who seemed strangely familiar and made him burn with a desire that seared his very soul. And as Brett swept Delta into his hungry embrace and caressed every soft, satiny curve, he knew that his only hope for salvation lay in the tender fury of their tempestuous union. A dangerous destiny had brought them together...and only together could they conquer the past and surrender to a passion that would unite them for all time!
Reviews from Goodreads.com