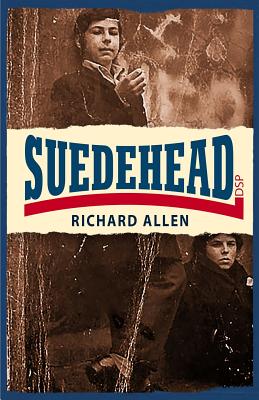 
Skinheads were dead, man. Phased out. Home had never appealed. All his life he had dreamed about a plush flat somewhere in the West End of London. So now he would make the leap from poverty street into the affluent society. In one gigantic jump.
Fresh out of stir after kicking a police sergeant’s head in, former skinhead Joe Hawkins is heading for the big time – a job in a firm of stockbrokers, a swanky flat and (hopefully) plenty of money. A whole new style is called for – so Joe becomes a Suedehead.
The hair is a few millimetres longer, the uniform a velvet-collared crombie coat, bowler hat and neatly-furled umbrella – with razor sharp tip. For while Joe might be playing the establishment pet, he remains the unrepentently vicious, cunning hooligan from Skinhead, intent on pulling women, stealing and putting the boot in. It’s not long before he finds some other Suedes willing to commit mayhem under cover of respectability... but can Joe and respectability ever really get along?
Suedehead is the second of Richard Allen’s era-defining cult novels featuring anti-hero Joe Hawkins. First published in 1971, this new edition features an introduction by Andrew Stevens.
“I did happen to read the book when it came out and I was quite interested in the whole Richard Allen cult... suedeheads and skinheads and smoothies were very much part of daily life. There was a tremendous air of intensity... something interesting grabbed me about the whole thing.” Morrissey
“(Richard Allen’s) work shouldn't require a theoretical summing up, once enough of those to whom it appeals understand its attraction we will have superceded this society.” Stewart Home