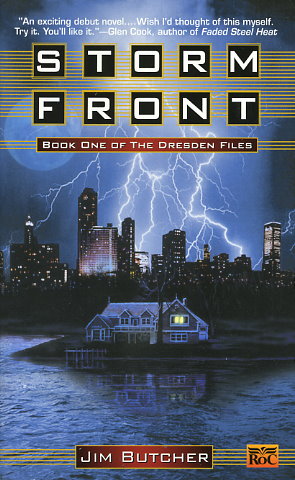 Harry Dresden is the best at what he does. Well, technically, he's the only at what he does. So when the Chicago P.D. has a case that transcends mortal creativity or capability, they come to him for answers. For the "everyday" world is actually full of strange and magical things--and most of them don't play well with humans. That's where Harry comes in. Takes a wizard to catch a--well, whatever.

There's just one problem. Business, to put it mildly, stinks. So when the police bring him in to consult on a grisly double murder committed with black magic, Harry's seeing dollar signs. But where there's black magic, there's a black mage behind it. And now that mage knows Harry's name. And that's when things start to get...interesting.

Magic. It can get a guy killed.
Reviews from Goodreads.com

Storm Front is book one of the Dresden Files by American author, Jim Butcher. High-class escort, Jennifer Stanton and a body-guard, Tommy Tomm are found murdered in a hotel in Chicago. The circumstances suggest sorcery is involved. Wizard and Paranormal Investigator, Harry Dresden soon finds he has a few problems: the head of CPD Special Investigations, Lieutenant Karrin Murphy wants Harry’s help in solving the case; Tomm’s boss, mobster Gentleman Johny Marcone wants Harry to actively not investigate; the White Council, overseeing all things wizardly, seem convinced that Harry is the murderer; Stanton’s boss, vampiress Bianca is angry over an accidental transgression; Susan Rodriguez, reporter for the Chicago Arcane, wants a scoop; oh, and he has another case to solve as well, a missing husband with a recent interest in magic.

This introduction to the Dresden Files sees Harry battling monsters, scorpions, gangsters, a drug dealer and other wizards; on one occasion, he does this naked, with shampoo in his eyes; on another, handcuffed to a semi-conscious Karrin. He makes potions (the love potion ingredients are particularly worth noting!), uses spells, and suffers quite a few injuries before finally getting out of some tricky situations. The advantage of the fantasy genre for an author is that they can make their own rules, so this instalment also serves to establish some ground rules for the world Butcher has created. Harry is an appealing character, as are Susan and Karrin, so readers who enjoy this book will be able to look forward to more of them in what looks to be an addictive series.