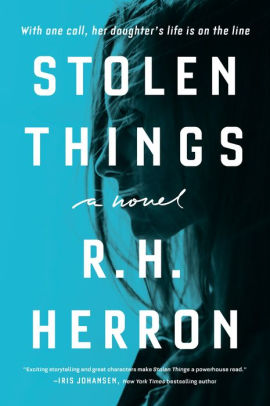 A sensational crime, a missing teen, and a mother and daughter with no one to trust but themselves come together in this shocking debut thriller by R. H. Herron.

Laurie Ahmadi has worked as a 911 police dispatcher in her quiet Northern California town for nearly two decades. She considers the department her family; her husband, Omid, is its first Arab American chief, and their teenaged daughter, Jojo, has grown up with the force. So when Laurie catches a 911 call and, to her horror, it's Jojo, the whole department springs into action.

Jojo, drugged, disoriented, and in pain, doesn't remember how she ended up at the home of Kevin Leeds, a pro football player famous for his on-the-field activism and his work with the CapB -- “Citizens Against Police Brutality” -- movement. She doesn't know what happened to Kevin's friend and trainer, whose beaten corpse is also discovered in the house. And she has no idea where her best friend Harper, who was with her earlier in the evening, could be.

But when Jojo begins to dive into Harper's social media to look for clues to her whereabouts, Jojo uncovers a shocking secret that turns everything she knew about Harper -- and the police department -- on its head. With everything they thought they could rely on in question, Laurie and Jojo begin to realize that they can't trust anyone to find Harper except themselves . . . and time is running out.
Reviews from Goodreads.com