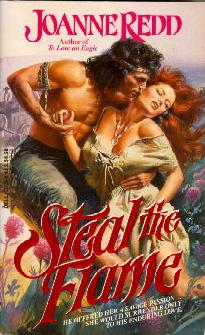 
WOMAN OF FIRE
She alone survived the deadly raid on her wagon train. Captured by a handsome savage, Brandy Daniels's fiery spirit was undaunted. The fierce warrior had saved her from death --- but for what other fate? His sensuality taunted her, his kisses burned her with a primitive, timeless passion, tempting her to surrender everything --- her past, her heritage . . . her very soul.

MAN OF FLAME
Flaming Arrow found himself gazing at the sky-blue eyes and burnished copper hair of an intoxicating beauty he would kill to have. She was his for the taking, but he wanted her warm and willing in his arms. His visions had shown him --- she was his destiny, willing or not. The fire raging in his blood demanded she be the woman to fight beside him . . . to share his reckless desire and bold, wild love.