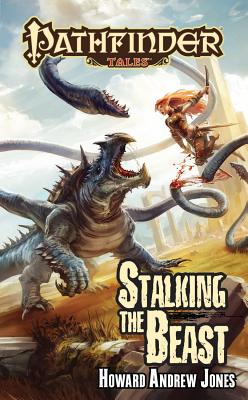 When a mysterious monster carves a path of destruction across the southern River Kingdoms, desperate townsfolk look to the famed elven ranger Elyana and her half-orc companion Drelm for salvation. For Drelm, however, the mission is about more than simple justice-it’s about protecting the frontier town he’s adopted as his home, and the woman he plans to marry. Together with the gunslinging bounty hunter Lisette and several equally deadly allies, the heroes must set off into the wilderness, hunting a terrifying beast that will test their abilities-and their friendships-to the breaking point and beyond. But could it be that there’s more to the murders than a simple rampaging beast?
From critically acclaimed author Howard Andrew Jones comes a new adventure of love, betrayal, and unnatural creatures, set in the award-winning world of the Pathfinder Roleplaying Game.