Stalin Versus Me — Donald Lamont Jack 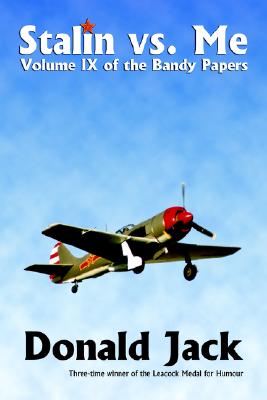 At long last -- the ninth and final volume of the Bandy Papers, Stalin Versus Me, in which quintessential Canadian hero Bartholomew Wolfe Bandy has one final fling with death, despair, and destruction, in the final year of the Second World War. In the aftermath of the Normandy invasion, Bandy continues to bob through the ranks like a cork at sea, persecuted by one of his pilots and pursued by Gwinny, who just can't understand why her attempt to have him convicted of treason has soured their relationship. Love rears its (elegant, Belgian) head again, the King needs a man of tact and discretion for a delicate post-war job in Germany, and there's an embarrassing parcel of ladies undies to explain, not to mention just why a half-clothed Bandy (unfortunately, not the right half) is in bed with George Garanine, that lazy, loveable, failed Bandy-assassin. From Normandy to Brussels to Yalta to Moscow, Bandy's career path is as labyrinthine as ever, strewn with bottles, battles, and brasshat blood-pressure. Of most crucial concern to our hero, as 1944 draws to a close and 1945 sees the last grim push of the war beginning -- boozing pal Philby of the SIS couldn't possibly have any reason to get Bandy sent to the Yalta Conference except as a translator, right? And Stalin can't really be out to get Bandy, just because he happens to know that a certain Soviet leader was once a Tsarist agent provocateur. After all, we all know Uncle Joe isn't the type to hold a grudge. Will Bandy survive? Will he get the, er, mature, middle-aged lady (unaccountably still in love with her lazy, loveable, long-lost husband?) Will a plane be purloined? Will his last few hairs hold out?
Reviews from Goodreads.com