Soul of a Viking — Sky Purington 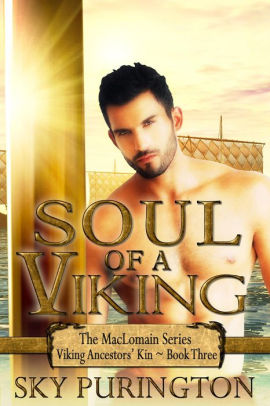 
Lauren refuses to believe that her sisters traveled back in time to tenth-century Scandinavia. Cybil must be off doing one thing or another. And what of Samantha? She returned then vanished again with a bunch of uncivilized ruffians who called themselves Vikings. While thankful the crude men finally left, she's now caught in an unusual situation. No matter how hard she tries, she cannot step foot outside her Winter Harbor chalet.

Desperate to return to the twenty-first century and figure out why he and Lauren were cursed by a Nidstang, Tait Sigdir struggles with what feels like half a soul. But that's not all. When he finally returns to the future, he realizes how troubling things really are. Though drawn to Shannon, he can't seem to stay away from her sister, Lauren. Hard to believe considering how difficult she is to be around. Even for a flirt like him. Yet if he's not near her, he becomes uncharacteristically sullen.

Caught in an unraveling hex that steers them closer to the enemy, Tait and Lauren are forced on an adventure that tests them in more ways than one. Friendship emerges. Passion ignites. Even so, love does not come so easily to those who are cursed. As it turns out, they must get through a whirlwind of unfortunate events that will either bring them together or drive them further apart.

***This book contains sexual content and is recommended for a mature audience.***