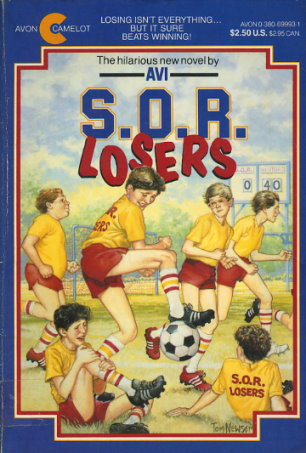 THEY'RE THE WACKIEST BUNCH OF LOSERS SINCE THE BAD NEWS BEARS!

The South Orange River (S.O.R.) School is famous for its winning sports teams--until the special 7th grade soccer team comes along. Led by the amazingly inept Ed Sitrow, this non-jock soccer squad sets new lows in team spirit and new highs in scoring--by their opponents. In fact, when they get creamed in their first game 32-0, they're more than eager to throw in the towel.

But the school and their own humiliated parents insist that they struggle on...to even more glorious defeats on the field. From scoring goals (for the other side) to scoring goals (for themselves by mistake), Ed and his faithful ten teammates know the real reason for their "success"--the can't-miss strategy that makes the S.O.R. Losers the winningest team in town!
Reviews from Goodreads.com