Somewhere in the Stars — Jo Calloway 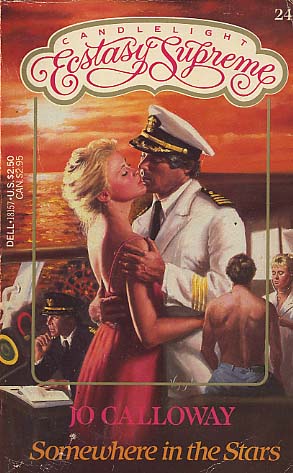 She'd abandoned her marriage and her surgical practice in Baton Rouge to voyage into the unknown as ship's doctor aboard the Royal Princess Star. But could a round-the-world cruise, a year's escape, outdistance the demons within? Or was Dr. Erin Barclay sailing into dangerous waters with Captain Kurt Garisen, who saw her as an irresistible challenge?

She couldn't ignore his authority--or the electricity between them. How could Erin set her life on course when she burned for Kurt's slightest touch, reveled in his arms, on the ravishing journey that swept them from the glories of Acapulco Bay through the sultry Panama Canal, from the sensuous South Pacific to sunset on a majestic South African peak. Soon their idyll would end. Soon she'd have to choose--to be at sea in the captain's paradise or landlocked in the career that was her life!
Reviews from Goodreads.com