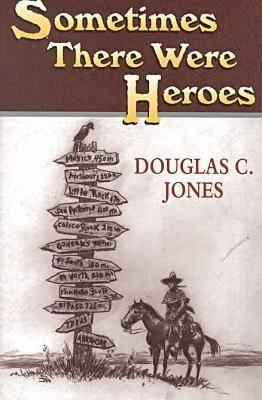 Arkansas native Douglas C. Jones (1924–1998) ranks right up there with Larry McMurtry, A.B. Guthrie, and Ron Hansen. Author of nineteen historical Westerns, including The Court-Martial of George Armstrong Custer, which was made into a Hallmark Hall of Fame movie, Arrest Sitting Bull, and Elkhorn Tavern, Jones was a three-time recipient of the Golden Spur Award, and in 1993, he received the Owen Wister Award for Lifetime Contribution and Achievement from the Western Writers of America.

His final novel, Sometimes there Were Heroes, originally published in 2000 and now in paperback, is the riveting tale of the brave and driven men and women of early Texas, told against the color backdrop of Bexar, the tiny Spanish mission that would later become San Antonio.

As witnessed through the unforgettable characters of the "Mexican Gringo" Paco Salazar, a German immigrant named Sophie, and the young Oscar Schiller, this history is made rich with intrigue, danger, murder and love as disparate cultures clash and bond on the American frontier. Tonkawa Indians and Bavarian settlers, Mexicans and Texicans, Comanches and Angelos all mingle memorably in this riveting drama.

Here are Sam Houston and Santa Ana, the Alamo, the founding of the Republic of Texas, the Texas Rangers, the forty-Niner Gold Rush, and the Civil War, all seamlessly woven into a suspenseful and colorful tale.

The author's own pencil and charcoal drawings further enliven the novel. From prologue to epilogue, this is a suspenseful book that will be hard to put aside until it is finished.
Reviews from Goodreads.com