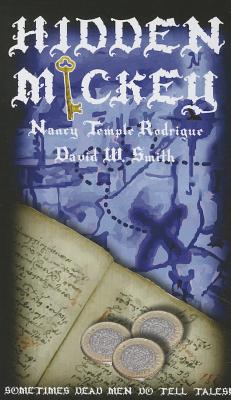 Share:
HIDDEN MICKEY 1 Sometimes Dead Men DO Tell Tales! 1st of the Hidden Mickey Mysteries about Walt Disney and Disneyland Magic Kingdom written for Adults, Teens, & Tweens (age 10 & up). If you like Kingdom Keepers by Ridley Pearson you will LOVE Hidden Mickey Adventures TWO FRIENDS FIND WALT DISNEY'S LOST DIARY Who knew it would lead them on a wild cross-country search filled with discoveries, about the famous man, his life, and about themselves. THE DIARY HINTS OF A HIDDEN TREASURE Beth, Adam's former girlfriend, was fired from her beloved job at Disneyland, thanks to Adam. Now he needs her help in untangling a web of clues that Walt left behind. Can she put their past aside and work with him again? Can the three friends decipher the eccentric clues that Disney himself may have ingeniously devised? WHO ELSE IS SEEKING THE TREASURE? As the clues lead them closer to their goal, and deeper in the legacy of Walt Disney himself, will they find some long-lost treasure? IS THIS ONE FINAL ILLUSION BY THE WORLD'S GREATEST STORYTELLER? Anyone who loves all-things Disney will be swept up in the intrigue of the sometimes subtle, sometimes obscure, and always amazing facts surrounding one of the most recognized, beloved and ingenious men of all time. Walk in the shoes of our intrepid treasure hunters as they scavenge historical records and discover amazing connections, while they seek out what Walt may have left behind. The story continues... HIDDEN MICKEY 2: It All Started... Another "E-Ticket" ride through Disney's history Want to go on your own 'E-Ticket' adventure? Next time you visit a Disney Park you can play in Quests like Adam & Lance by bringing with you a copy of HIDDEN MICKEY ADVENTURES in Disneyland - HIDDEN MICKEY ADVENTURES in Disney California Adventure , or for our east coast Fans: HIDDEN MICKEY ADVENTURES in WDW Magic Kingdom (or download one to your mobile device). Hidden Mickey 1: Sometimes Dead Men DO Tell Tales! is Flesch-Kincaid Grade 4.2 - Flesch Reading Ease 83