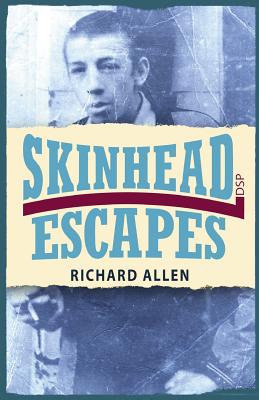 
Down below, like some gigantic monster from Earth’s dark past, a moving van waited in the mist. Judging the distance as best he could, Joe leaped into space . . .
Get Joe Hawkins! Vicious former skinhead Joe Hawkins has done a runner from prison. On the lam, he cuts a swathe through England’s heartland, sex and violence very much on his mind. Newly equipped with a shooter, Joe pals up with armed robbers, evading the coppers by a whisker. But Joe’s now a marked man – a powerful criminal is gunning for him, with no plans to quit until he’s found his target. Even Joe’s never been in this tight a spot before . . .
Skinhead Escapes (1972) was the third book in Richard Allen’s bestselling Skinhead series, one of the most potent artefacts of British popular culture ever committed to print.
“I did happen to read Skinhead when it came out and I was quite interested in the whole Richard Allen cult . . . suedeheads and skinheads and smoothies were very much part of daily life. There was a tremendous air of intensity . . . something interesting grabbed me about the whole thing.” Morrissey
“(Richard Allen’s) work shouldn't require a theoretical summing up, once enough of those to whom it appeals understand its attraction we will have superceded this society.” Stewart Home