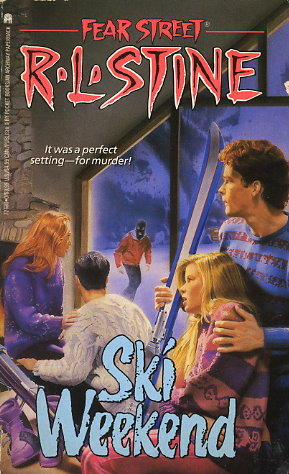 WELCOME TO FEAR STREET
Don't listen to the stories they tell you about Fear Street. Wouldn't you rather explore it yourself... and see if its dark terrors and unexplained mysteries are true? You're not afraid, are you?

Snowbound!
"Red" Porter was a stranger they'd met on their ski weekend. But Ariel Munroe, Doug Mahr and his girlfriend Shannon Harper were grateful he was there when they set out for home on the icy roads. Thank heaven for Red! He spotted the hilltop lodge when they were stranded by the blizzard. He took charge when they stumbled into strange surroundings, scared, tired and looking for refuge. But can he save them when their refuge becomes a trap? Suddenly their hosts are acting very sinisterly. Doug's car is gone. The phones are dead. And the house is full of guns. If they steal one, maybe they can escape! Until a shot is fired and the real terror begins...
Reviews from Goodreads.com