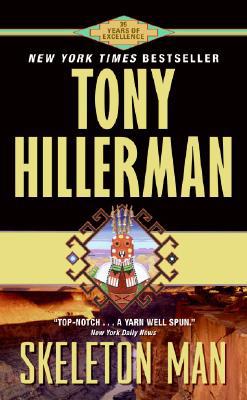 Former Navajo Tribal Police Lieutenant Joe Leaphorn comes out of retirement to help investigate what seems to be a trading post robbery. A simple-minded kid nailed for the crime is the cousin of an old colleague of Sergeant Jim Chee. He needs help and Chee, and his fiancee Bernie Manuelito, decide to provide it.

Proving the kid's innocence requires finding the remains of one of 172 people whose bodies were scattered among the cliffs of the Grand Canyon in an epic airline disaster 50 years in the past. That passenger had handcuffed to his wrist an attache case filled with a fortune in -- one of which seems to have turned up in the robbery.

But with Hillerman, it can't be that simple. The daughter of the long-dead diamond dealer is also seeking his body. So is a most unpleasant fellow willing to kill to make sure she doesn't succeed. These two tense tales collide deep in the canyon at the place where an old man died trying to build a cult reviving reverence for the Hopi guardian of the Underworld. It's a race to the finish in a thunderous monsoon storm to see who will survive, who will be brought to justice, and who will finally unearth the Skeleton Man.
Reviews from Goodreads.com