She's Gotta Have It — Niqui Stanhope 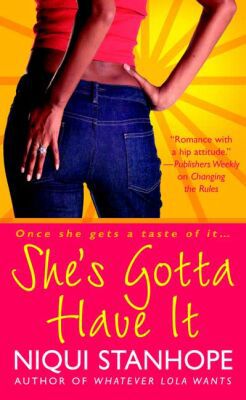 
Camille Roberts is about to marry a very wealthy, much older man. She has told her best friend, Lola St. James, that she will only marry for money and not for love. She is convinced that she is not the corporate type. In fact, she has underlined the fact that she would be perfectly comfortable just staying at home and looking after an entire pack of kids. But, any dreams of children will have to be shelved since her older fiance (57 years old), has already raised three children of his own - two girls and a boy - all of whom are excelling in their respective careers, and has neither the time nor the interest in becoming a father again. He has told her that he will not change his mind on this matter, and so she will just have to console herself with all the things his money can buy her.

Camille is forced to make a hard choice. Marry for love and live a modest traditional life with a good, nine-to-five working man, or marry for money and live the lavish jet-setting life of the rich and famous. Camille chooses to go for the money, and a lavish wedding is planned.

But, two months before her scheduled nuptials, Camille decides to treat herself to one final fling of the riotous kind. A "get your groove back," trip to Jamaica, where she will - for one final time, deliberately seek out and bed the sexiest, most booty-licious young man she can find - before settling down to a life of placid sexuality.