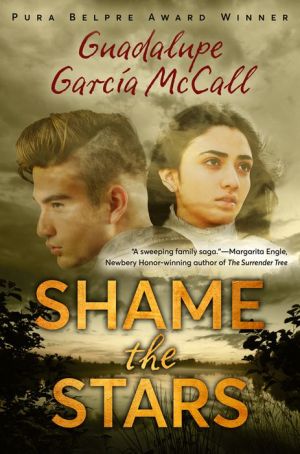 Share:
Eighteen-year-old Joaquin del Toro's future looks bright. With his older brother in the priesthood, he s set to inherit his family s Texas ranch. He s in love with Dulcena and she s in love with him. But it s 1915, and trouble has been brewing along the US-Mexico border. On one side, the Mexican Revolution is taking hold; on the other, Texas Rangers fight Tejano insurgents, and ordinary citizens are caught in the middle.
As tensions grow, Joaquin is torn away from Dulcena, whose father s critical reporting on the Rangers in the local newspaper has driven a wedge between their families. Joaquin s own father insists that the Rangers are their friends, and refuses to take sides in the conflict. But when their family ranch becomes a target, Joaquin must decide how he will stand up for what s right.
Shame the Stars is a rich reimagining of Romeo and Juliet set in Texas during the explosive years of Mexico s revolution. Filled with period detail, captivating romance, and political intrigue, it brings Shakespeare s classic to life in an entirely new way."