Shadows of the Knight — Michelle Miles 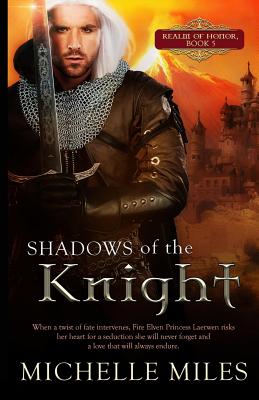 Share:
Book 5 in the Realm of Honor SeriesAs the king’s health declines, Prince Andahar takes the throne but his rule faces war with the Fomorians, enemies who have carved a path of devastation throughout the realm. When the Fire Elven princess, a striking beauty, arrives in his kingdom with a plea for help, he knows he cannot refuse her. Nor can he resist her and vows to fight for her hand from any challengers no matter the cost.Princess Laerwen’s people are mercilessly massacred and facing annihilation, so she turns to the ones she blames—the Wood Elves. Upon meeting Andahar, she learns who the true enemy is and enlists his help to regain her realm and destroy the Fomorians once and for all. But undeniable passion ignites between them and she is powerless to resist. And one kiss will never sate her desire for the prince. Even though she battles her growing feelings, he has made it quite clear he would do anything to have her. When a twist of fate intervenes, Laerwen risks her heart for a seduction neither will forget and a love that will always endure.