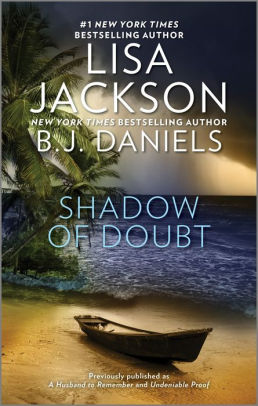 Enjoy dramatic twists and turns in these two romantic suspense classics from New York Times bestselling authors Lisa Jackson and B.J. Daniels, available now in one volume!A Husband to Remember by Lisa JacksonNikki Carrothers wakes in an island hospital with no memory of her past or how she got there—or of Trent McKenzie, the man claiming to be her husband. Though she's powerfully attracted to him, Nikki's not sure she can trust him. But Nikki is part of an ongoing investigation that has placed both of them in danger, and she'll have to keep Trent close if she wants to survive…Originally published in 1993.Undeniable Proof by B.J. DanielsCape Diablo is the perfect place for Willa St. Clare—the only eyewitness to a murder investigation—to disappear. Only, she doesn’t realize she is being followed. As someone on the island wants to make sure Willa remains deadly silent, her only hope for survival rests with undercover cop Landry Jones. But as the danger around them escalates, is their undeniable attraction the greatest risk of all?Originally published in 2006.
Reviews from Goodreads.com