Serpents in the Garden — Anna Belfrage 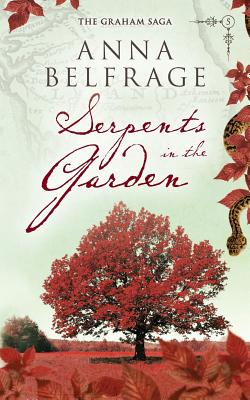 
After years of hard work, Matthew and Alex Graham have created a thriving home in the Colony of Maryland. About time, in Alex's opinion, after far too many adventures she is really looking forward to some well-deserved peace and quiet. A futile hope, as it turns out. Things start to heat up when Jacob, the third Graham son, absconds from his apprenticeship to see the world - especially as Jacob leaves behind a girl whom he has wed in a most irregular fashion. Then there's the infected matter of the fellow time traveller Alex feels obliged to help - no matter the risk. Worst of all, one day Philip Burley and his brothers resurface after years of absence. As determined as ever to make Matthew pay for every perceived wrong - starting with the death of their youngest brother - the Burleys play out a complicated cat and mouse game, and Alex is thrown back into an existence where her heart is constantly in her mouth, convinced as she is that one day the Burleys will achieve their purpose. Will the Burleys succeed? And if they do, will the Graham family survive the exacted price? 'Serpents in the Garden' has been awarded a B.R.A.G. Medallion and was the Historical Novel Society's Indie Editor's Choice in 2014.