Secrets of the Heart — Jo Grant 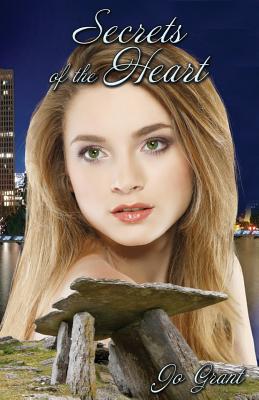 Share:
Hollywood superstar Conor Fitzpatrick was captivated when he met a beautiful young woman who looked eerily like the childhood sweetheart he'd left back in Ireland thirteen years ago.

But pretty Kiera Donovan was hiding a tragic secret that would change his life—and could prove deadly to them both!

“Peggy?” An electric shock tingled through Conor’s long fingers when his hand closed over the girl’s slender arm.

She spun around, and gaped up at him in blank shock. And even before she stepped back, with a stammered, “My name isn’t Peggy!” he knew he’d been wrong.

“My name is Kiera Donovan.”

They both spoke at the same time, then stopped in momentary confusion. Conor broke the baffled silence first by flashing her a smile guaranteed to melt even the stoniest heart.

“You are from Ireland.” It was more a question than a statement. “It’s amazing, you know, your resemblance to Peggy Malone, the girl I knew back home. And I’m completely forgetting my manners.” With a rueful grimace, he offered his hand. Another electric jolt sizzled along his nerve endings as their fingers met. “I’m Conor Fitzpatrick.”

The entire world knew Conor Fitzpatrick’s astoundingly handsome face. And Kiera felt mesmerized as she stared up at him, drinking in details made even more stunning by proximity.

He was the hottest name in Hollywood…and with good reason. There was even talk about him becoming the next Bond sensation—partly, she was sure, because of his striking resemblance to an earlier Bond actor.

And he was smiling down at her with that multimillion dollar smile, and clasping her hand like a long-lost friend! The sheer energy radiating from his lean body made Kiera feel like she’d grabbed the wrong end of a bare electrical cord. At any moment, smoke might start pouring from her ears!

“Well, it’s a lovely treat to hear a familiar voice so far from home,” he exclaimed. “Will you have lunch with me?”

Any other woman would have sold her soul for the chance to stroll down Sunset Blvd. on Conor Fitzpatrick’s muscular arm. But for Kiera, the prospect was a terrifying nightmare. Her heart slammed against her ribs like a jackhammer as she hastily tugged her hand free, and backed away.

“I can’t.” Even in her own ears, her panicked refusal sounded rude and abrupt. Quickly she forced an apologetic smile. “I’m sorry. My lunch break is only an hour, and I’m due back in ten minutes. If I’m late, Chandra will have my head. It was nice meeting you, Mr. Fitzpatrick.”

Conor watched the graceful sway of her back as she hurried away, unlocked the door of a small, battered black Honda, and slid inside. Then he made his thoughtful way back to Liam Kerry, his personal assistant and bodyguard, who’d been carefully watching the entire exchange from a tactful distance.

“What on earth did you say to her, Con?” Liam looked as baffled as he felt, and it showed on his deceptively-boyish, freckled face. “That’s not the usual effect you have on women!”

“For a moment, I thought she was an old friend from Ireland. I suppose this proves the old tale that everyone has a double roaming about somewhere.” Conor leaned one broad shoulder against a nearby tree, and slowly shook his head. “Irish she is, and alike enough to be Peggy’s sister. But Peggy Malone she’s not. It’s all very curious.”

Something in his voice made the younger man look closer, and then a crafty grin curved his lips. “You aren’t going to let her get away, are you?”

“Oh, no.” Smug satisfaction colored Conor’s rich voice. “Lady Luck’s with me today, boyo. I know where she works. I’ve a gut feeling that there’s more to this Kiera Donovan than meets the eye, and I want to see her again…”