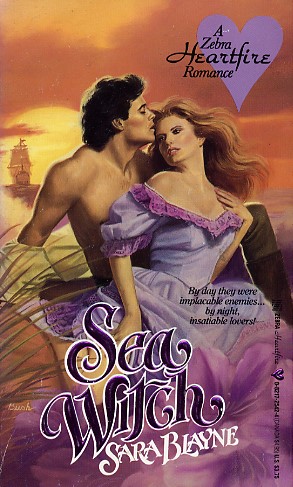 DARING DECEPTION
Sabra Tyree knew she was walking a treacherous tightrope. For weeks at a time, she sailed the seas as the captain of the rebel privateer Nemesis, eluding British frigates like the formidable Black Swan -- then returned to her carefully-planned role as New York's renowned Tory beauty. And now she had Trevor Myles to worry about! The handsome British naval officer made it impossible to concentrate on the business at hand. Instead Sabra found herself entranced by Trevor's silvery-gray eyes... and tempted by the passion in his steely embrace!

CONSUMING OBSESSION
Trevor Myles was captivated by Sabra's sparkling sea-green eyes and striking red-gold hair. At least she took his mind off his failure to sink that blasted Nemesis. The captain of the Black Swan grinned wryly as he realized how much he admired his unseen opponent. But there'd be time enough to settle that score. For now he's concentrate on the woman in his arms. The softness of Sabra's skin made him think of the finest silks; her kiss was sweeter than the purest honey. And he knew that, before he sailed again, he would uncover every delectable inch of her... all her secrets, all her treasures... and satisfy her every desire!
Reviews from Goodreads.com