Screaming Across the Sky — Brian Daley 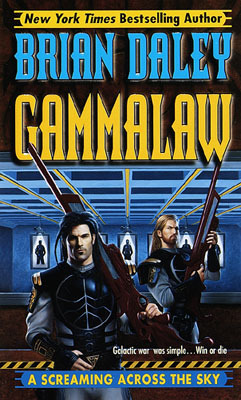 Arrival on the ominous planet of Aquamarine was a splashdown into danger and death for Periapt high priestess Dextra Haven and her ragtag force of scientists and Ext warriors. Yet Dextra was undeterred, certain that Aquamarine held the key to peace between humans and a fierce alien race.

But the priestess and her mighty warriors would need to summon all their powers, for the sea-planet was rife with many deadly mysteries--and conquerors both seen and unseen lurked in cyberspace and outer space waiting to invade, possess, and destroy. . . .