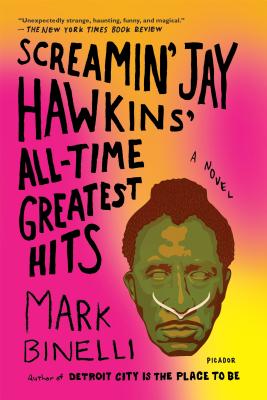 Mark Binelli turns his sharp, forceful prose to fiction, in an inventive retelling of the outrageous life of Screamin' Jay Hawkins, a bluesman with one hit and a string of inflammatory guises

He came on stage in a coffin, carried by pallbearers, drunk enough to climb into his casket every night. Onstage he wore a cape, clamped a bone to his nose, and carried a staff topped with a human skull. Offstage, he insisted he'd been raised by a tribe of Blackfoot Indians, that he'd joined the army at fourteen, that he'd defeated the middleweight boxing champion of Alaska, that he'd fathered seventy-five illegitimate children.

The R&B wildman Screamin' Jay Hawkins only had a single hit, the classic "I Put a Spell On You," and was often written off as a clownish novelty act -- or worse, an offense to his race -- but his myth-making was legendary. In his second novel, Mark Binelli embraces the man and the legend to create a hilarious, tragic, fantastical portrait of this unlikeliest of protagonists. Hawkins saw his life story as a wild picaresque, and Binelli's novel follows suit, tackling the subject in a dazzling collage-like style.

At Rolling Stone, Binelli has profiled some of the greatest musicians of our time, and this novel deftly plays with the inordinate focus on "authenticity" in so much music writing about African-Americans. An entire novel built around a musician as deliberately inauthentic as Screamin' Jay Hawkins thus becomes a sort of subversive act, as well as an extremely funny and surprisingly moving one.
Reviews from Goodreads.com