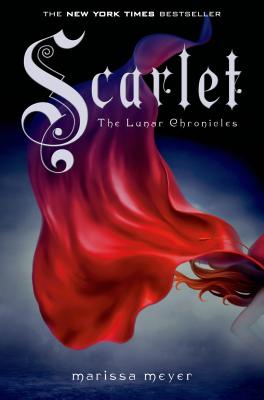 Cinder, the cyborg mechanic, returns in the second thrilling installment of the bestselling Lunar Chronicles. She's trying to break out of prison--even though if she succeeds, she'll be the Commonwealth's most wanted fugitive.

Halfway around the world, Scarlet Benoit's grandmother is missing. It turns out there are many things Scarlet doesn't know about her grandmother or the grave danger she has lived in her whole life. When Scarlet encounters Wolf, a street fighter who may have information as to her grandmother's whereabouts, she is loath to trust this stranger, but is inexplicably drawn to him, and he to her. As Scarlet and Wolf unravel one mystery, they encounter another when they meet Cinder. Now, all of them must stay one step ahead of the vicious Lunar Queen Levana, who will do anything for the handsome Prince Kai to become her husband, her king, her prisoner.
Reviews from Goodreads.com

“I love the retelling of a good fairy tale and Marissa Meyer's Scarlett was wonderful to experience. It held just enough of the original tale to tie to it and yet there was a whole new exciting story to be told. I could not put it down, which is always a good sign. Scarlett is searching for her missing Gran Mere', and meets up with the big bad wolf as it should be. But this big bad wolf does not just have meat on his mind. He seems to be discovering the world for the first time. Scarlett and him strike up a tender agreement, he will help her in her search. But is everything as it is shown to be ? I can't spill, sorry. If you love fairy tales this series is wonderful, but do start with book 1 Cinder, they tie together.
Wolf is what a werewolf should be, wicked, snarly, dangerous, alpha-ish, sexy, drooling and honest ? He has burning green eyes, tattoos, scars and 6 feet plus of sin.* Yeah, that yummy.* Then there is the confused side the side that does not understand kindness exactly. Wolf is one mixed up puppy, and I loved his character.
Scarlett, our little red hoodie girl for this story is red-headed, hot headed and runs into action without thinking. desperate to find her Grand Mere' after she disappears. She gives her opinion loudly, causes uproars and basically acts out against everyone while dealing with her fears. Her naiveté places her in the middle of something very dangerous setting her on a path she can never back away from.
Cinder our cyborg lunar heroine is still held captive after being accused of trying to kill somebody in the last book. She must face her destiny many lives depend on her action. She ties herself to a shady thief and together they slowly head towards her destiny.
Kai- the young Emperor, is undecided, uneasy and weak in his duties. Can you tell I disliked him in this book ? He really disgusted me many times with his wishy washy behavior. 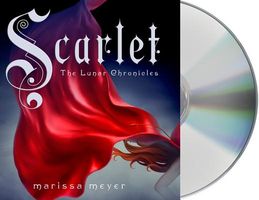