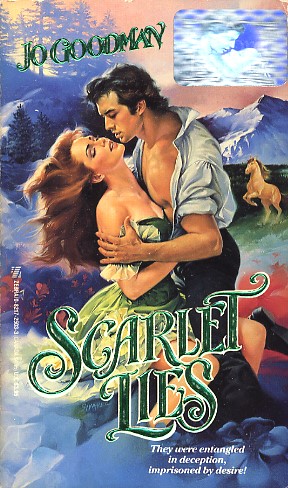 Brooklyn Hancock was no stranger to dangerous situations. But finding herself at the mercy of a man she'd swindled was enough to make the blue-eyed adventuress a bit nervous. Particularly since her would-be mark was intimidatingly strong, incredibly handsome, and undeniably furious. When he pulled a gun on her and ordered her to strip, she coolly complied, knowing she'd soon turn the tables on her unsuspecting captor. But when he pinned her beneath his lean, muscular body, she stopped thinking about escape and began considering the merits of unconditional surrender!

Ryland North had his eye on Brook from the moment he set foot on the Mississippi riverboat. His best friend had lost a fortune to the chestnut-haired chit and Ryland was out for revenge. Now he had her right where he wanted her. .. half naked and helpless in his arms. This part of his plan would be a true pleasure. He would relish making her bend to his will, succumb to his desire. He would watch her startling blue eyes darken with passion; he'd treasure the sound of her begging for his caresses. And before this night was over, they'd revel in the sinful consequences of her SCARLET LIES
Reviews from Goodreads.com