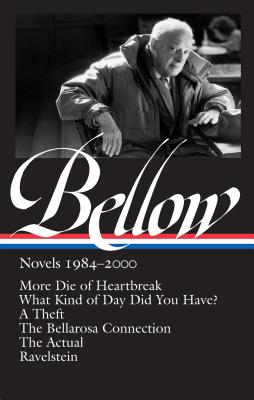 For his centennial (June 10, 2015), The Library of America and editor James Wood present the final volume in the definitive edition of Saul Bellow’s complete novels. In the last stage of his unparalleled career—which included winning the Nobel Prize in Literature in 1976—Saul Bellow remained an uproarious comic storyteller, a provocative thinker deeply engaged with the intellectual cross-currents of his time, and a magnificent prose stylist. Gathered here are four shorter works—What Kind of Day Did You Have? (1984), A Theft (1989), The Bellarosa Connection (1989), and The Actual (1997)—along with More Die of Heartbreak (1987), a novel that “changes the way you see everything” (Martin Amis), and Bellow’s extraordinary valedictory, Ravelstein (2000), about a professor of political philosophy made suddenly famous by an unlikely bestseller. Brimming with Bellow’s characteristic wit and ebullience, but imbued with the awareness of approaching death, Bellow’s final book is an unforgettable meditation on love and friendship, eros and mortality.

LIBRARY OF AMERICA is an independent nonprofit cultural organization founded in 1979 to preserve our nation’s literary heritage by publishing, and keeping permanently in print, America’s best and most significant writing. The Library of America series includes more than 300 volumes to date, authoritative editions that average 1,000 pages in length, feature cloth covers, sewn bindings, and ribbon markers, and are printed on premium acid-free paper that will last for centuries.
Reviews from Goodreads.com