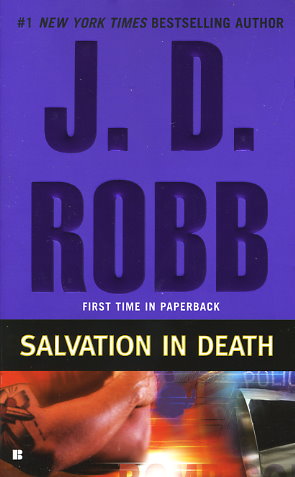 Share:
In the year 2060, sophisticated investigative tools can help catch a killer. But there are some questions even the most advanced technologies cannot answer. Ancient church rituals meet cutting- edge crime solving.

During a Catholic funeral mass Father Miguel Flores brings the chalice to his lips, seconds after partaking of wine, the priest is dead on the altar.

When New York Detective Lieutenant Eve Dallas confirms that the consecrated wine contained enough potassium cyanide to kill a rhino, she's determined to solve the murder of the Father, despite her discomfort with her surroundings. It's not the bodegas and pawnshops of East Harlem that bother her, though the neighborhood is a long way from the stone mansion she shares with her billionaire husband, Roarke. It's all that holiness flying around at St. Christobal's that makes her uneasy.

A search of the victim's sparsely furnished room reveals little -- except for a carefully hidden religious medal with a mysterious inscription, and a couple of underlined Bible passages. The autopsy reveals more: faint scars of knife wounds, a removed tattoo -- and evidence of plastic surgery, suggesting that “Father Flores” may not have been the man his parishioners had thought. Now, as Eve pieces together clues hint identity theft, at gang connections and a deeply personal act of revenge, she believes she's making progress on the case. Until a second murder -- in front of an even larger crowd of worshippers -- knocks the whole investigation sideways. And Eve is left to figure out who committed these unholy acts -- and why.