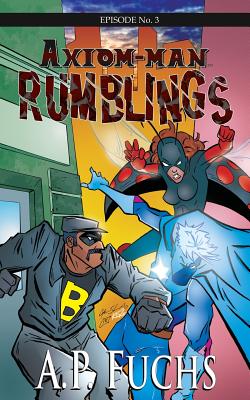 Axiom-man has been captured and locked inside an enormous electric cage. Within? A small city and residential zone. Who made them or for what purpose, he doesn't know. One thing is certain, however: he is trapped and at the mercy of those who took him captive. The intentions are soon made clear with the appearance of two super-powered beings: the tank-like Battle Bruiser and the playful femme fatale Lady Fire. Soon the battle begins and Axiom-man is forced to survive against those with powers that rival his own. And it seems these two new metahumans are only the beginning. Something is brewing beneath the surface of reality, something sinister that will change the course of history and Axiom-man's life forever. Something is rumbling. About the Author: A.P. Fuchs is the author of many novels and short stories. His most recent efforts of putting pen to paper are Axiom-man Episode No. 3: Rumblings, The Dance of Mervo and Father Clown, The Canister X Transmission: Year One and Mech Apocalypse. Also a cartoonist, he is known for his superhero series, The Axiom-man Saga, both in novel and comic book format. For more on A.P. Fuchs, please visit his blog/site at http://www.canisterx.com, and sign up for his free weekly newsletter, which includes publishing and marketing tips, at http://www.tinyletter.com/apfuchs He can also be followed on Twitter at http://www.twitter.com/ap_fuchs
Reviews from Goodreads.com