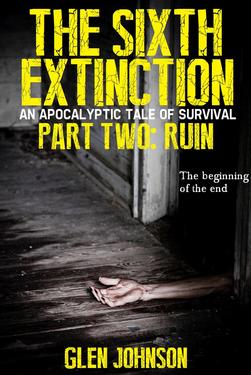 Ruin is Part II in The Sixth Extinction Series.

A pandemic has swept the globe, decimating humanity, affecting all who breathe in its deadly spores. The Sixth Extinction Series follows a collection of people from all walks of life, as they struggle to survive through the eradication of the human race.

Doctor Melanie Lazaro identified the marker of the disease on the human DNA chain, and she carries a file with the information needed to create a blocker, to stop the disease from spreading. While she was being shown the four different stages of the transformation of the human host, the building came under attack by a horde of the infected. During the attack, she was rescued and placed on a helicopter en route to the Dartmoor military base. The helicopter crashed and Lazaro, along with nine military personnel, has to take shelter in a dentist’s clinic, while fighting back a mass of the infected. They gain new transportation; however, it proves to be a fatal mistake.

Noah and Red join forces with an old woman called Betty, and her special need’s grandson, Lennie. The four of them hear the gunfire of the soldiers from the crashed helicopter, and Noah leaves the three behind in a house while he goes in search of rescue. However, not everything goes according to plan, and he finds himself in the wrong place at the worst possible time.

Due to the timeline, the whole country is now overrun with stage three eaters – crazed, animalistic predators that only have one thing on their mind – to eat.
Reviews from Goodreads.com