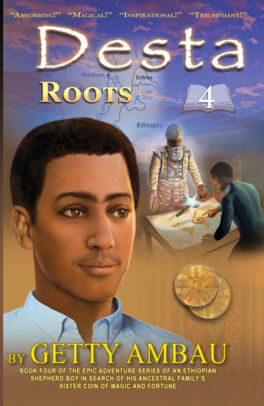 
In this sprawling epic, Desta continues his dual mission to earn a modern education and reunite King Solomon's Coin of Magic and Fortune with its twin shekel that he owns. Heeding the ancient prophecy, he journeys to a remote town to pursue his goals but soon discovers that he is there to learn of his ancestral roots and gain the knowledge and tools needed for his quest.

Desta meets Tsadok, his benevolent spirit-guide, who reveals Desta's profound ties from the storied waters and soils of Ethiopia to sacred and powerful Near Eastern monuments and artifacts to all of Western history. He learns that the blood of ancestral prophets, priests, princesses, and kings, from Judah and Egypt to Nubia,courses his veins; and that he has been predestined to safeguard King Solomon's spiritual legacy and magical powers for a heretofore hidden purpose.

Desta's high school studies and a kindly benefactor inspire him to pursue a medical career. Yet as Tsadok's lessons fill in the pieces of a cosmic puzzle, Desta's vow to reunite the magical coins pulls him away from his personal goals. Torn between his dual callings, Desta must choose whether to defer his personal dreams, not knowing where or when his search for the coin will end. His future a mystery, and guided only by faith in himself, his roots, and his destiny,Desta forsakes his familiar world, and embarks uneasily on a voyage into the unknown.