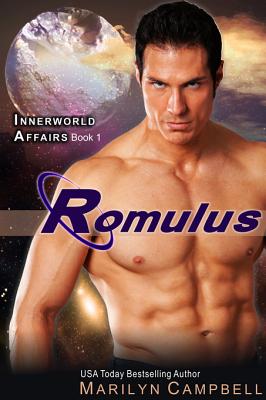 
Aster Mackenzie wants to go home. But she's trapped in the Earth's core, where advanced humanoids mine a rare energy source for their home planet, Norona. Worse, she's triggered the Noronian mating fever in Romulus Locke, Innerworld's Chief Administrator.
Romulus intends to be Governor of Innerworld but the moment he touches Aster, the fever takes hold, bonding them as soul-mates. Never has the fever affected a Terran, and intimacy between the races is forbidden; a conundrum Romulus has no time to explore.
The asteroid heading toward Earth is about to destroy both their worlds. Risking everything, Romulus takes Aster with him to Outerworld to warn Earth's scientists and is captured.
Now Aster must face her destiny and convince the powers of Norona to accept a long-hidden secret if her soul-mate is to survive.
Previously titled: Pyramid of Dreams
REVIEWS:
"First of a landmark series... provocative concepts... will fascinate and charm romance fans." Romantic Times
"The fiery passion will singe your heart... You will be mesmerized by this exceptional reading adventure " Rendezvous
The Innerworld Affairs Series, in order
Romulus
Falcon
Gallant
Gabriel
Logan
Roman
MEET MARILYN CAMPBELL:
Marilyn Campbell is a USA Today Bestselling author and a true thrill-junkie who believes a great roller coaster ride can cure whatever ails her. Marilyn resides in the Sunshine State, with her four-legged companions, Milk-Dud and Sweetie.