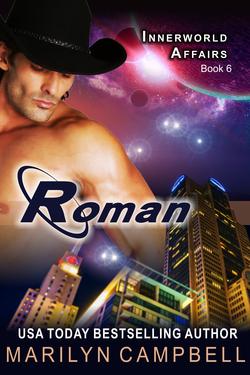 
Roman Locke's ability--to become invisible--makes him the perfect Innerworld spy. His new assignment: secretly observe parapsychologist Erin Breswell as she hunts down a power-hungry psychic criminal.
But Roman's presence triggers a cat-like heat in Erin, which affects his invisibility control, forcing Roman to reveal himself in full Noronian mating fever.
Neither Roman nor Erin desire the lifelong commitment the fever requires, but if they don't take drastic action, neither will survive the coming storm.
THE INNERWORLD AFFAIRS SERIES, in order
Romulus
Falcon
Gallant
Gabriel
Logan
Roman
Blaze
MEET MARILYN CAMPBELL:
Marilyn Campbell is a USA Today Bestselling author and a true thrill-junkie who believes a great roller coaster ride can cure whatever ails her. Marilyn resides in Massachusetts, with her four-legged companions, Milkdud and Sweetie.