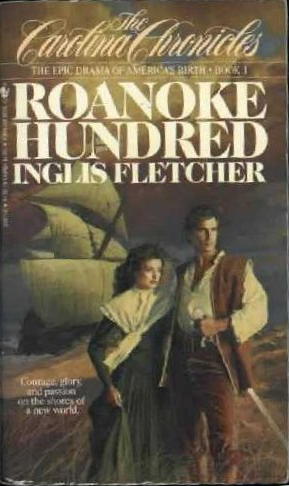 Share:
Carolina Chronicles
THE EPIC DRAMA OF AMERICA'S BIRTH • BOOK I
They came from positions of privilege and power, and from lives wracked by servitude and poverty. Together, they sailed across an ocean toward the opportunities and dangers of the new world. The courage of these pioneering men and women claimed a new nation-and a monumental dream. From Colonial days to the Revolutionary War, bestselling author Inglis Fletcher unfolds the epic drama of America's birth.
From Queen Elizabeth's court to the decks of the mighty Revenge to the wild shores of a new land, the valiant Roanoke Hundred challenged the unknown. SIR RICHARD, gallant, lion-hearted member of Parliament, confidant of Sir Walter Raleigh...COLIN, his young herd boy, hungry for renown...THOMAS1NE, dark-eyed servant girl, free-spirited, rebellious.., in all, one hundred adventurers, fighting as equals against savage Indians, Spanish cutthroats, and the villainy of their own countrymen to fulfill their courageous and passionate quest on Roanoke Island, the first English settlement in America.