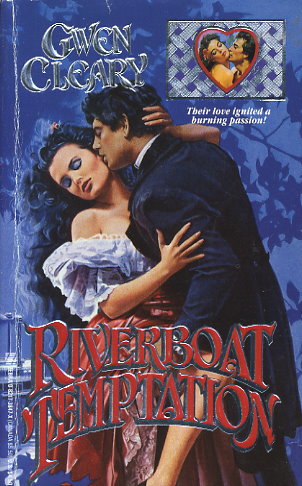 WAS HE HER ENEMY?
Columbia Baranoff and her pa worked their paddlewheeler up and down the Willamette Rive with pride. Unfortunately, they had one greedy competitor who would stop at nothing to drive everyone else out of business. Nothing, Columbia realized, including hiring Nash Foster to ship some of the cargo meant for The Columbia. Was Nash just a pawn in this all-or-nothing battle? Or did he, too have a reason to ruin her? She couldn't tell what side this handsome river captain was on, for while he was enemy by day, he urged her to accept him as a passionate lover by night... and it was hard to believe be meant business when he was holding her close, making her tremble with desire...

SHE WAS HIS DREAM
Who was this spitfire to tell Nash who he could work for? He and bis crew bad to make a living, too. The Baranoffs did not own the river. But if this innocent beauty continued to tempt him with her brilliant blue eyes and glorious inane of ebony bait; be would show her how to bargain with the competition. For Nash knew that once be took Columbia's curvaceous body in bis arms. she would glory in the endless pleasures of bis loving embrace!
Reviews from Goodreads.com