Rise of the Ultras — Matt Blake 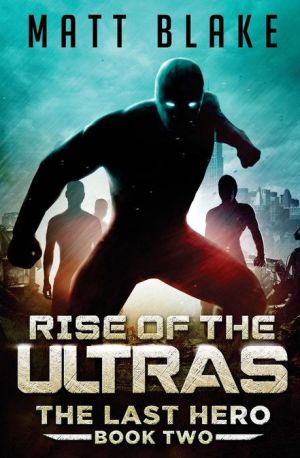 The gripping second installment in Matt Blake's hit The Last Hero series. Kyle Peters' life is pretty perfect right now. Six months have passed since the showdown with Nycto, and Kyle is settling into a normal life as a seventeen year old. He has a girlfriend. He has some awesome friends. And he has a bunch of superpowers, too. The ability to fly, to teleport, and to fire ice from his hands. Life is good as the last ULTRA in existence. But when a series of devastating attacks stun the world, Kyle soon learns that he isn't alone: there are other ULTRAs out there, with abilities just like his. Only these ULTRAs don't seem too keen on maintaining world peace. These ULTRAs are hellbent on destruction. And matters are made even more terrifying by the government's introduction of their new program: the ULTRAbots. Machines with the abilities of ULTRAs, but completely controllable by humans. Designed for one purpose: to hunt down every last ULTRA in existence. Now, with the ULTRAbots hunting him down and the rival ULTRAs growing even more destructive, Kyle Peters must embrace his Glacies identity once again if he wants to protect the lives of those he loves, and the lives of everyone on the planet. Rise of the ULTRAs is the second book in Matt Blake's The Last Hero superhero/urban fantasy series. With lovable characters, nail-biting action and adventure, and thrilling twists and turns, The Last Hero is sure to delight all fans of the genre.
Reviews from Goodreads.com